Steve grew up in Cincinnati, where he played a lot of junior golf.

Throughout high school, Steve worked in golf course maintenance, after which he attended the OSU Assistant Training program.

Following completion of the program, Steve moved to Tucson, AZ, where he worked at a few courses at the staff level. While in Tucson, Steve got his Bachelor of Agronomy from University of Arizona.

Upon completion of his turf degree, Steve’s first big break came with the Assistant position at La Paloma, a Jack Nicklaus Design. La Paloma was a big step in the level of maintenance and opened many doors.

Steve’s first Superintendent job came by means of Grand Oak Golf Club in Indiana. It was an 18 hole course that had been closed and Steve was tasked with resurrecting it.

Through a connection made at La Paloma, Steve was asked to be the grow-in Superintendent for the Jack Nicklaus designed Springfield Royal in Hua Hin, Thailand. Steve was recently single and went for it despite knowing nothing about the culture. 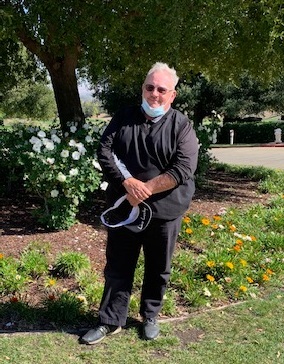 Steve grew-in Springfield and stayed on for 4 years. While there, he was recruited to be the grow-in superintendent for a 36-hole course in Kuning China. 18 holes designed by RTJ Jr. and 18 by guess who? Jack Nicklaus. While Steve was Superintendent, his course was rated #1 in China!
While in China, Steve married his now wife Sylvia and made the move back to the USA.

In 2001, he was hired at Ruby Hills, where he has now been for nearly 20 years, and where he is accompanied by his German Shepherd, Coco.

He started turf reduction projects before they were cool and started bringing in definition with the use of native grasses.
Steve accepts this award on behalf of the folks that work for him and who have worked with him over the years.

He’d be remiss if he didn’t mention Arcis Golf and what they’ve meant to Ruby Hills and its future.